The German Center for Diabetes Research (DZD) presented itself in all sessions of the 48th Annual Meeting of the European Association for the Study of Diabetes (EASD) from October 1-5, 2012 in Berlin. Parallel to the symposia and lectures held by DZD scientists, the DZD stand in the Association’s Village was a much visited meeting place for international and Germany-based diabetes researchers.

Even before the official conference opening, Prof. Michael Roden, member of the board of the DZD and director of the German Diabetes Center in Düsseldorf, and Prof. Andreas Pfeiffer of the German Institute of Human Nutrition in Potsdam-Rehbrücke and this year’s EASD chairman invited conference attendees to their symposia on Sunday, September 30th entitled “Mitochondrial Biology in Human Diabetes and Metabolic Diseases” and “Translating Recent Discoveries in Cellular Energy Metabolism to Obesity and Diabetes Nutrition Therapy”. 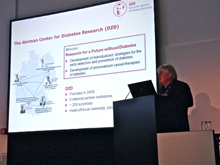 As part of the EURADIA Symposium with internationally renowned diabetes experts, which took place on October 1st prior to the EASD opening ceremony, DZD board member Prof. Hans-Ulrich Häring of the Institute for Diabetes Research and Metabolic Diseases of Helmholtz Zentrum München at the University of Tübingen presented an overview of the structures and main research areas of the German Center for Diabetes Research (DZD), which is funded by the Federal Ministry of Education and Research (BMBF). The scientists and audience from all over Europe were impressed by the opportunities provided for basic researchers and clinicians for translational diabetes research through funding by the Federal Government in Germany.

The scientific results of the DZD partners were presented in a number of free lectures and well-attended poster sessions. Furthermore, the symposium held by Prof. Matthias Tschöp, director of the Institute of Diabetes and Obesity at Helmholtz Zentrum München, entitled “Hypothalamic Inflammation and the Metabolic Syndrome” attracted many diabetes experts.
The EASD attendees obtained further information about DZD projects at the DZD stand in the Association’s Village. In a relaxed atmosphere over a cup of coffee they were able to make many new contacts and discuss the new data. A new brochure describing the research groups, network projects and main research areas of the DZD was of particular interest to young international researchers. In addition, DZD speaker Prof. Martin Hrabě de Angelis, Helmholtz Zentrum München, Prof. Hans-Georg Joost, German Institute of Human Nutrition, and Dr. Astrid Glaser, head of office of the DZD, welcomed EASD President Prof. Andrew Boulton, Manchester, to the DZD stand. 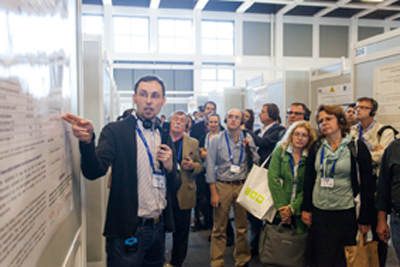 Overall, with more than 18,000 diabetes experts attending, the conference in Berlin was the second largest event ever organized by the EASD. Participants from 131  countries attended the annual meeting of this European association. A pioneer of diabetes research was also commemorated in Berlin: On September 30th a bust of Paul Langerhans (1847 -1888) was unveiled on the grounds of the Charité. The Berlin researcher made many important discoveries regarding diabetes mellitus. A portrait of Paul Langerhans is also part of the DZD logo.