"How will diabetes develop over the next 40 years?" This was the title of Martin Hrabĕ de Angelis’ congratulatory speech in which he gave exciting insights into the current state of research. The aim of the DZD is to identify people with a high risk of diabetes at an early stage in order to prevent the outbreak of the disease and possible sequelae. In his speech Hrabĕ de Angelis emphasized the good quality of the reporting of the Diabetes Ratgeber: "The magazine fulfills an important function for society."

Anne-Bärbel Köhle, editor-in-chief, Andreas Arntzen, CEO of the publishing house, and Dr. Dennis Ballwieser, managing director, reviewed the history of the magazine. They underscored that thanks to the digital edition in addition to the traditional print medium, the magazine is well prepared for the future – true to the motto of the Diabetes Ratgeber "Living well despite diabetes”.

The physician and cabaret artist, Eckart von Hirschhausen, emphasized that "health follows education" and, in his well-known humorous way, suggested that health care needed to invest more in prevention and education and communicate this in such a way that people actually changed their behavior. 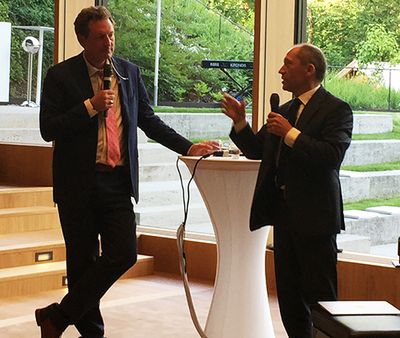