Just in time for World Diabetes Day, the national diabetes information portal www.diabinfo.de has announced that it has expanded its content offering. In addition to German and Turkish, information for people with diabetes and diabetes prevention is now also available in Polish and, soon, in Russian. In addition, the portal, with its scientifically validated content, will also be aimed at the professional groups of pharmacists and PTAs from November 14.

All over the world and also in Germany, the incidence of diabetes is on the rise. According to estimates, 700 million people worldwide will have diabetes by 2045. The national diabetes information portal www.diabinfo.de offers information about the metabolic disease and its prevention. The portal thus helps to make up-to-date and scientifically validated knowledge about all forms of diabetes accessible to the general public. The content and target groups of the portal are constantly being expanded.

Specific content now offered for pharmacists and PTAs
The diabinfo.de section for professionals has so far mainly offered extensive content and materials for diabetes counselors. For World Diabetes Day 2021, the portal will now also publish practical assistance and information on diabetes specifically for the everyday work of pharmacists and PTAs. With this expansion, diabinfo.de is pursuing the goal of providing quality-assured information on the different forms of diabetes in more accessible settings – i.e., by providing advice in pharmacies – and pointing out potential ways of preventing type 2 diabetes.

In addition to German, Turkish and Polish, content will soon be available in Russian
People with a migrant background often not only have an increased risk of diabetes, but in some cases are also inadequately provided with information about the disease. In order to increase the health literacy of people with a migrant background living in Germany, diabinfo.de provides relevant topics on diabetes and the prevention of type 2 diabetes in various languages. Currently, extensive content can be found in Turkish and now also in Polish. At the beginning of 2022, the information will also be published in Russian. Furthermore, diabinfo.de promotes culturally sensitive advice for people with diabetes and a migrant background by providing content on eating habits, among other topics. For example, there is information on what people with diabetes should bear in mind when participating in the fasting month of Ramadan. 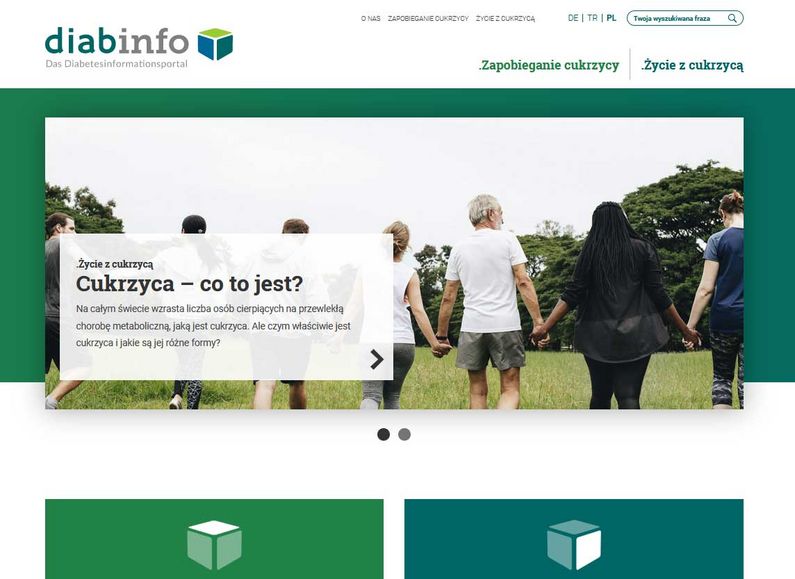 The Polish diabinfo pages offer - as in Turkish - the sections Preventing Diabetes and Living with Diabetes. © diabinfo.de

About diabinfo.de
The national diabetes information portal diabinfo.de is a joint service of Helmholtz Zentrum München, the German Diabetes Center in Düsseldorf and the German Center for Diabetes Research. Due to the special proximity to world-renowned scientists in the field of diabetes, the portal is committed to making the latest results from research accessible to the general public in a generally understandable way. In addition to current news and basic knowledge, background articles and frequently asked questions, the online portal also includes explainer videos, infographics, checklists and podcasts on a wide range of diabetes-related topics. In addition, with the support of the Helmholtz Association, teaching materials are being created that can be downloaded free of charge from the website for teachers and students.

Events for this year's World Diabetes Day
On the occasion of this year's World Diabetes Day on November 14, 2021, diabetesDE – German Diabetes Aid is organizing an online patient event in which diabinfo expert Professor Martin Hrabě de Angelis, board member of the German Center for Diabetes Research, director of the Institute of Experimental Genetics at Helmholtz Zentrum München and chair of Experimental Genetics at Technische Universität München, will also participate. Here he will provide information on the current state of diabetes research to people with diabetes and those who have an increased risk for diabetes, as well as family members and interested individuals. You can access the event via the following link: https://www.weltdiabetestag.de/

In addition, the German Diabetes Center, together with the North Rhine-Westphalian regional association of German Diabetes Aid – People with Diabetes (DDH-M) is holding a health market in Düsseldorf on November 14th with numerous information stands on the topic of diabetes and health. As a sign of the worldwide fight against diabetes, the Tonhalle, the Rhine Tower, the ferris wheel and the German Diabetes Center in Düsseldorf will be illuminated in blue to draw attention to and inform about the disease and to raise awareness about this chronic metabolic disease.