Dopamine Action on Metabolism Depending on Genetic Heterogenety (DAG)

This study will be conducted throughout Germany in four study centers. 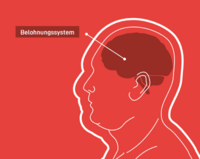 Background of the study

Two thirds of the population are currently overweight. Excess weight causes a number of illnesses, such as diabetes and heart attack as well as joint problems.

The causes of overweight are:

In addition, the brain has a decisive influence on eating behavior and thus also on body weight. In particular, the reward system (dopaminergic system) plays a key role here. Dopamine is a neurotransmitter that can trigger a reward sensation after eating. Overweight people have a reduced reward sensation after eating. This is probably due to a decreased release of dopamine in the brain.

Our genes also influence our body weight. An important risk gene influences the reward system in the brain.

The planned study will investigate whether this gene alters the effect of dopamine in the brain.

The study investigates the effect of an approved drug on weight loss. The drug is to be taken for 18 weeks; half of the participants will take the approved drug, the other half a placebo (tablet without active ingredient).

We examine the influence of the drug on

You will receive appropriate financial compensation for the expenses incurred. This study has been approved by the Ethics Committee.