Overweight or obesity, an unfavorable distribution of fat in the body and the development of type 2 diabetes are often associated with a reduced effect of the hormone insulin in many organs, including the brain (insulin resistance). So far there is no treatment to restore insulin sensitivity in the brain, which plays a key role in metabolic control. Researchers of the German Center for Diabetes Research (DZD), the departments of Internal Medicine IV (Director: Prof. Andreas Birkenfeld) and Clinical Chemistry and Pathobiochemistry (Director: Prof. Andreas Peter) of Tübingen University Hospital and the Institute of Diabetes Research and Metabolic Diseases (IDM) at Helmholtz Munich have now shown for the first time that the SGLT2 inhibitor empagliflozin can be used to treat insulin resistance in the brain – with positive effects on the metabolism of the entire body. This study has now been published in ‘Diabetes Care’.

The brain has a decisive influence on our eating behavior and thus also on body weight and metabolism. If the brain reacts sensitively to insulin, we eat less, less abdominal fat is stored, and the insulin sensitivity of the entire body improves. However, in people with obesity or type 2 diabetes, the hormone in the brain is no longer effective. This insulin resistance leads to a disturbed metabolism. So far, insulin resistance in the brain cannot be treated with drugs. The researchers investigated whether a diabetes drug from the SGLT2 inhibitor group can also reverse insulin resistance in the brain. SGLT2 inhibitors reduce elevated blood glucose levels in diabetes by promoting glucose excretion through the urine and have a beneficial effect on the heart, circulation and kidneys. For this purpose, the effect of the SGLT2 inhibitor empagliflozin on the insulin sensitivity of the brain was investigated in study participants with a preliminary stage of diabetes (prediabetes).

In a prospective, randomized, double-blind study, 40 people with prediabetes (age: 60 ± 9 years; BMI: 31.5 ± 3.8 kg/m²) received the drug empagliflozin or a placebo for eight weeks. The researchers used functional magnetic resonance imaging (fMRI) to determine the insulin sensitivity of the brain before and after treatment. For this purpose, the subjects were given insulin via a nasal spray. When the hormone is absorbed through the nose, it reaches the brain directly. In addition, whole-body magnetic resonance imaging (MRI) was used to determine fat distribution.

SGLT2 inhibitor increases insulin sensitivity of the brain
"While placebo administration had no influence on insulin action in the brain, empagliflozin treatment significantly improved the effect of the hormone on brain activity," said lead author PD Dr. Stephanie Kullmann, summarizing the results of the study. Empagliflozin administration also improved fasting glucose levels and decreased liver fat content. Although the SGLT2 inhibitor did not reduce weight, it did reduce body fat content.

As a next step, the researchers plan to investigate whether the improved insulin action in the brain is also involved in the beneficial effects of SGLT2 inhibitors on the heart and kidneys. 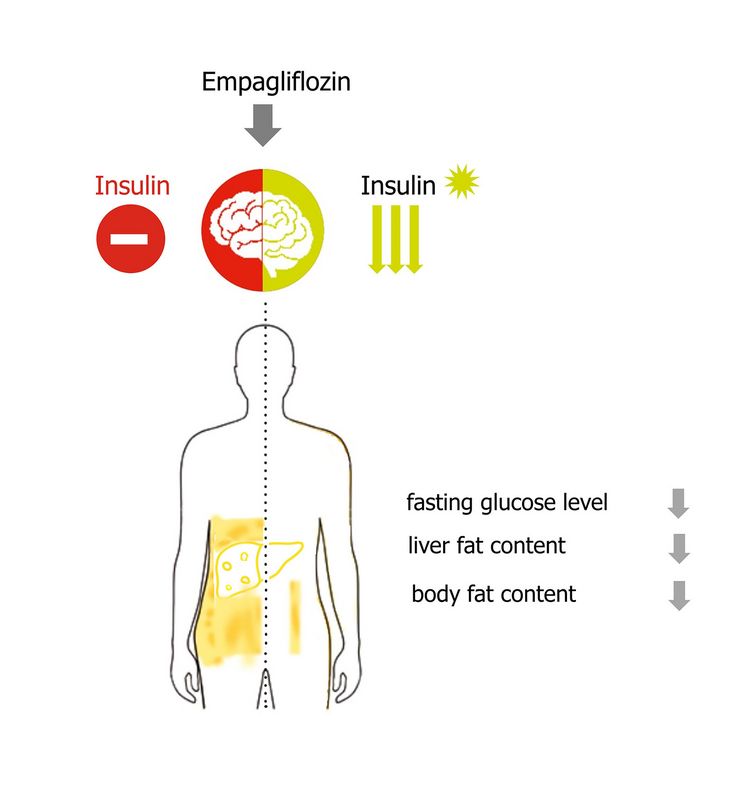 SGLT2 Inhibitors
SGLT2 inhibitors (SGLT = sodium glucose transporter) are drugs from the group of antidiabetic agents. They lower blood glucose by blocking the SGLT2 transport protein in the kidneys. As a result, the glucose cannot be transported back into the blood vessels and is excreted in the urine.