On June 24, 2019, 10 years to the day since the signing of the founding documents, the German Center for Diabetes Research (DZD) celebrated its anniversary in Berlin, the city where the founding took place. The ceremony with guests from the political arena and science as well as greetings from the ministers of the federal states involved was followed by a scientific symposium to present the joint research results. An evening in a convivial atmosphere rounded off the festivities.

The Federal Ministry of Education and Research (BMBF) sought to promote intensive cooperation between scientists from various special fields when it founded the German Centers for Health Research (DZG). The objective: to bring research results to patients faster and more precisely – and conversely to incorporate findings from the clinic into research.
More than 400 experts from basic and clinical research, epigenetics and healthcare research work together at the sites of the five partners and five associated partners as well as in international collaborations. "A completely new model has been been firmly established," said DZD board member Prof. Martin Hrabé de Angelis, commenting on the construct of the DZD which has been developed over the last 10 years. 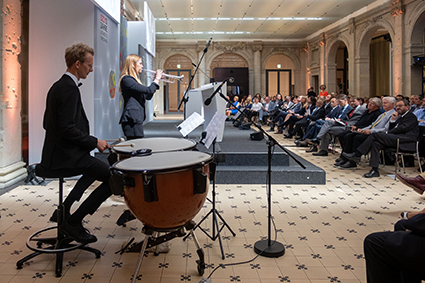 National and international significance of the DZD
In his welcoming address, State Secretary Dr. Georg Schütte, BMBF, said: "It took courage to start something new and determination to push this topic forward. 422 million people worldwide have been diagnosed with the disease, about seven million of them in Germany. These figures have tripled since the 1980s. Type 1 diabetes is the most common metabolic disease in children; type 2 diabetes is being diagnosed in younger and younger people.

The envoy of the French Embassy, Guillaume Ollagnier, reported on the two scientific congresses that took place in Berlin in 2014 and 2018 at the Embassy. Professor Ulf Smith from Gothenburg, Sweden, chairman of the Scientific Advisory Board of the DZD, congratulated the German government on its concept of health centers.

Scientific findings from 10 years of research
In a retrospective discussion with the five speakers of the DZD, Caro Matzko of Bavarian Radio, who moderated the ceremony, highlighted the most important scientific findings since the DZD’s foundation. It is now known that the brain and non-alcoholic fatty liver play an important role in type 2 diabetes and obesity. Scientists have deciphered hormones and combined their molecules to create polyagonists to counteract the disease. Studies conducted in parallel at several partner institutions have revealed that there are several subtypes of type 2 diabetes. This can already be seen in the preliminary stage, prediabetes, where it is now possible to specifically take more individualized measures for the prevention of secondary diseases. The role of genes in type 1 and type 2 diabetes has been further explored; it has also been found that epigenetic changes influence the disease likelihood for subsequent generations. In the future, researchers hope to use encapsulated stem cells to replace beta cells. 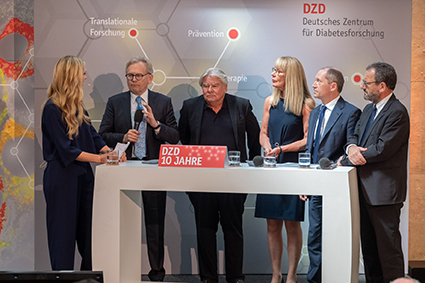 A patient’s perspective
In a panel discussion in which Cornelia Bühl, a type 2 diabetes patient, and Professor Baptist Gallwitz of the German Diabetes Association (DDG) took part, it became clear how research results find their way into treatment via guidelines for physicians. Mrs. Bühl, who after her diagnosis not only changed her diet and lifestyle, told us why she was glad to participate in the study as a test subject.

Finally, three young scientists reported on their career paths at the DZD. Last but not least, the annual DZD Diabetes Research School offers doctoral students and postdocs many opportunities for exchange and contact with renowned colleagues. At the following scientific symposium, the achievements to date and the resulting future questions were presented in more detail. The evening meeting with scientists, representatives from the administration and many other colleagues from 10 years of DZD provided the occasion for personal exchange. 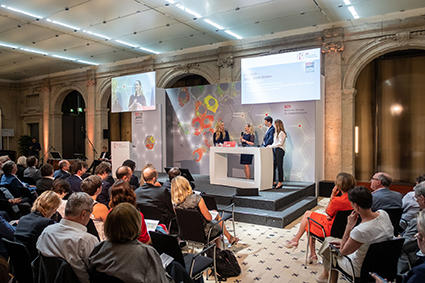