The initiative “SMS. Be smart. Join in. Be fit." of the DZD partner German Diabetes Center has joined up with the project “Wanted: Sandlot Football Heroes" to promote regular physical exercise among primary school children.

The project “Wanted: Sandlot Football Heroes” of the Düsseldorf Citizens‘ Foundation offers children free public football (soccer) training sessions at eight municipal football fields of the city of Düsseldorf. The training sessions take place weekly from April to October and are coached by professional football trainers and former, well-known football pros of Fortuna Düsseldorf such as Egon Köhnen, Wilfried Woyke, Gerd Zewe and Günter Thiele. In cooperation with the Sandlot Football Heroes, the SMS initiative is seeking to give primary school children an additional sports option and to encourage a healthy lifestyle, also outside of school. The children of the GGS Adam-Stegerwald-Straße and the KGS Josef-Kleesattel-Straße will be offered the first test training, which will take place on June 28, 2017 in Garath under the direction of the Düsseldorf Citizens’ Foundation. 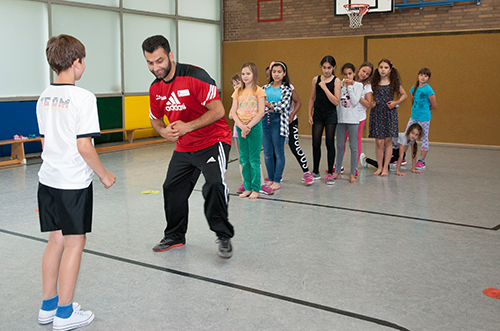 Within the framework of the project “Wanted: Sandlot Football Heroes”, the Düsseldorf Citizens’ Foundation has been offering free football training sessions for more than five years. "We are very pleased about the cooperation with the SMS initiative and hope to gain many new sandlot football heroes,” said Lothar Wolter, project manager and coordinator of the Sandlot Soccer Heroes. “We not only want to convey the importance of regular exercise to the children at school, but also to show them additional sport offerings in the afternoons in order to promote a healthy lifestyle in the long term“, said project leader Professor Karsten Müssig, emphasizing the importance of the cooperation.

The initiative “SMS. Be smart. Join in. Be fit." led by Professor Karsten Müssig at Düsseldorf primary schools seeks to counteract overweight/obesity and other lifestyle-related diseases in childhood and adolescence. The children earn  their “aid” nutrition pilot license in cooperation with the Educational Center for Dietary Assistants of the Kaiserswerther Diakonie and take part in the exercise program for primary schools “Fitness for Kids” developed by sports scientist Professor Kerstin Ketelhut.
In addition, the pupils experience the perception of their own body in the sensory classroom of the Präha Weber School in a motor skills training course. They are also taught relaxation exercises in cooperation with the initiative “Physical Activity during School Recess” of the Dietrich Grönemeyer Foundation and the Deichmann company.  The two health insurance companies IKK classic and KKH, the organization diabetesDE - German Diabetes Aid, the Sports Department of Düsseldorf and other renowned partners and prominent people support the project and provide the participating school children with additional attractive venues for learning outside of school. The patron of the initiative is Thomas Geisel, mayor of the state capital Düsseldorf. In 2015 the SMS initiative was awarded the support logo of IN FORM – Germany’s initiative for a healthy diet and more exercise, and in 2016 was awarded the GUT DRAUF label of the German Center for Health Education (BZgA).

Further information about the initiative is available at: www.sms-mach-mit.de