The award-winners of the Hansen Family Award 2017 have been named: Professor Jens Brüning and Professor Matthias H. Tschöp are this year’s recipients of the award of the Bayer Science & Education Foundation, which is endowed with prize money of EUR 75,000 each. The award recognizes the groundbreaking findings and paradigm-shifting discoveries of the two scientists in the fields of diabetes and obesity.

Professor Brüning of the Max Planck Institute for Metabolism Research in Cologne and member of the DZD Research Coordination Board received the prize for his fundamental insights into the role of the brain in the development of diabetes. His work on insulin activity in the CNS as well as his research into systemic feeding control signals and obesity-induced deregulation of these signaling pathways have paved the way for novel therapy options for obesity and type 2 diabetes mellitus.

Professor Tschöp of Helmholtz Zentrum München and head of the DZD research area New Therapeutic Concepts received the award in recognition of his paradigm-shifting discoveries about gut-brain communication pathways related to hunger signals. His pioneering combination of physiology research with human biology and peptide-based pharmacology has led to breakthrough discoveries resulting in multiple novel drug candidates with unprecedented potential to stop the worldwide obesity and type-2-diabetes pandemic.

“Diabetes is on the increase all over the world, and one major risk factor is obesity. Understanding the metabolic and hormone-related pathways and signals in the body has the potential to lead to urgently needed new prevention and treatment options. Both Jens Brüning and Matthias Tschöp are pioneers in this field of research and therefore deserving of this prestigious award,” said Professor Ernst-Ludwig Winnacker, Chairman of the Board of Trustees of the Bayer Science & Education Foundation.

The awards will be presented on May 15, 2017 during a ceremony in Berlin. 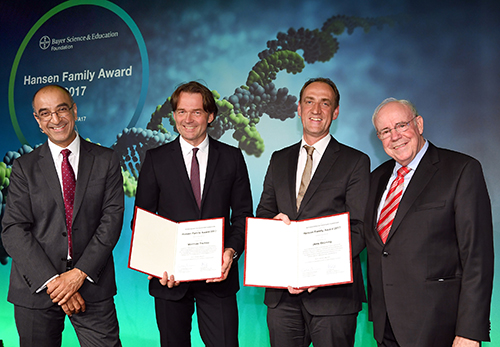