On September 19, 2017, the German Institute of Human Nutrition Potsdam-Rehbruecke (DIfE), a DZD partner institute, will celebrate its 25th anniversary with more than 400 registered guests and colleagues. The anniversary celebration of the Leibniz Institute will begin with a scientific symposium, followed by an official ceremony and a summer party.

The following external speakers have been invited to the ceremony: Dr. Martina Münch, Minister of Science, Research and Cultural Affairs of the State of Brandenburg; Professor Oliver Günther, the President of the University of Potsdam; Dr. Renate Loskill, Head of the Department of Health Research at the Federal Ministry of Education and Research; and Professor Matthias Kleiner, President of the Leibniz Association. The detailed program can be found at:http://www.dife.de/veranstaltungen/_downloads/DIfE_Prospektblatt_2017.pdf  The German Institute of Human Nutrition was established on January 1, 1992 by the Federal Republic of Germany and the State of Brandenburg.The official opening ceremony took place on September 19th of the same year. At that time the Institute belonged to the so-called “Blue List”. Today it is one of the leading institutes of the Leibniz Association. 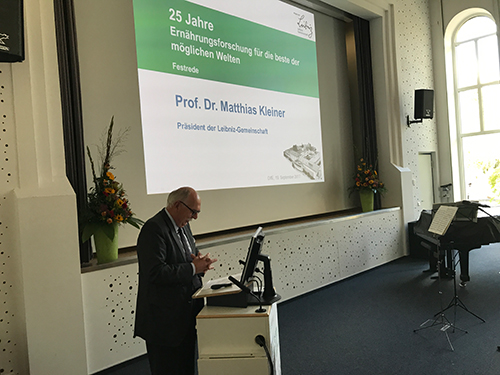 Nutritional research in Rehbruecke began in 1946 at the Institute of Nutritional Sciences and Food Provision and continued at the Central Institute of Nutrition(ZfE) of the Academy of Science of the German Democratic Republic from 1969 until 1991.  Thus, at the Rehbruecke location, DIfE looks back on a more than 70-year research tradition in the field of nutrition. While the scientific activities of the ZfE in the 1980s mainly focused on food research, DIfE has been conducting research on the relationship between nutrition and health since its inception.
In particular, Professor Hannes B. Stähelin from Basel, who was at that time Chairman of the Founding Committee, determined the direction of the future scientific work of the institute.

Since then, in interdisciplinary cooperation, DIfE scientists have been investigating the causes of nutrition-associated diseases in order to develop new strategies to more effectively prevent or treat these diseases. The researchers are also developing scientific principles, which, for example, are incorporated into the recommendations of the German Nutrition Society. They use a broad spectrum of scientific, medical and epidemiological methods for this purpose.

In the first years after the founding of the institute, the Board of Trustees, the Foundation Director, and the Scientific Committee focused on the creation of DIfE’s public profile in the national and international research landscape, on the recruitment of senior scientists, and on the renovation of the institute buildings. Later came the new building of the Rudolf Schönheimer Guest House as well as the Max Rubner Laboratory, in which the DIfE’s central animal husbandry is accommodated. All in all, the developmental years were characterized by great financial challenges, which could only be mastered through the immense commitment of all the individuals involved in the development of the institute.

Today, construction activities are once again on the agenda. The planned new building of the University of Potsdam for the Institute of Nutritional Science and at the same time the planned construction of a lab and office complex of DIfE on the Rehbruecke  Campus shall help make the location an even more modern and attractive center of nutrition and health research in the state of Brandenburg.
"The establishment of a research campus for nutrition and health is a project that once again underscores the long-standing successful cooperation with the University of Potsdam, the Federal Government, and the State of Brandenburg,” said Tilman Grune, Scientific Director of DIfE." He went on to say: "In the 25 years of its existence, DIfE has steadily developed into a nationally and internationally recognized beacon of nutrition research. I am certain that the institute will continue to make an important contribution to basic research in the German health system
in cooperation with its partners and supporters."

Both DIfE and the Institute of Nutritional Science of the University of Potsdam  are located in Potsdam-Rehbruecke. Both institutes have not only been working successfully together in teaching, they also cooperate in the DIfE-led research alliance “NutriAct”, which the Federal Ministry of Education and Research has funded since 2015. The collaborative project, in which more than 50 partners from science and industry are involved in the region of Berlin-Potsdam, aims to contribute to the health status of the age group “50plus” in the population.

Background Information:
Information on the history of DIfE can be found at:

http://www.dife.de/dife/geschichte/  and in the brochure "25 Jahre
Ernährungsforschung für die beste der möglichen Welten" (in German, 25 Years of Nutrition Research for the Best of All Possible Worlds), which is available for download for 28 days:
https://pc14.dife.de/get/nlegfr

Information on the history of the Blue List and the Leibniz Association can be found at:
https://www.leibniz-gemeinschaft.de/ueber-uns/geschichte/

Information on the Competence Cluster Nutritional Research Berlin-Potsdam(NutriAct) can be found at:
http://www.dife.de/dife-vernetzt/forschungsverbuende/national/nutriact/
and http://www.nutriact.de/