More than 100 young diabetes researchers from all over the world took part in the virtual DZD Diabetes Research School (DRS) this autumn. In the online lecture series of the German Center for Diabetes Research (DZD), six international experts gave an overview of current research topics: from stem cell research in connection with genetically caused diabetes to immune therapies that could revolutionize the prevention and early treatment of type 1 diabetes.

The DZD Diabetes Research School is designed for doctoral students and postdocs as well as scientifically active physicians in the field of diabetes research. "Recognized scientists from Europe and the USA present cutting-edge results and future-oriented research areas to talented young researchers in overview lectures," said Martin Hrabě de Angelis, board member of the DZD. The DRS 2020 took place over the course of three weeks (September 29 – October 15) on a total of six afternoons.

Lecture topics
To start off the event series, Philipp Scherer of the University of Dallas, Texas gave a lecture entitled “The Adipocyte as a Central Pillar of Metabolic Well-Being: The Past 20 Years and the Next 20 Years”, illustrating the particular importance of the largest endocrine organ, adipose tissue. With leptin and adiponectin he focused on two important cytokines of adipocytes, which also have considerable therapeutic potential for the treatment of obesity. With his studies he could show that a reduction of elevated leptin levels in any case promotes metabolic health. Katie Page of the University of Southern California Los Angeles in her lecture "Brain Regulation of Nutrition" brought into play another organ, the brain, which plays a central role in metabolism. Her data show that the intake of fructose versus glucose has completely different effects on the brain. Fructose leads to increased appetite.

Miriam Cnop (University of Brussels) started off the second week of the event with current findings on genetically caused diabetes: A newly discovered mutation causes diabetes by disrupting the transport between the Golgi apparatus and the endoplasmic reticulum. Marit Eika Jørgensen, epidemiologist at the Steno Diabetes Center Copenhagen, gave exciting insights into practical research in Greenland: "Precision Medicine in Diabetes: Insights from the Inuit Population in Greenland".

In his lecture, Bente Klarlund Pedersen of the University of Copenhagen focused on the muscle, an organ whose endocrine significance is becoming increasingly important for research. And Colin Dayan of Cardiff University gave a promising outlook on possible immunomodulatory therapies that could revolutionize the prevention or early treatment of type 1 diabetes. His data show that even a relatively short delay in disease progression with already developed therapies has long-term positive effects. 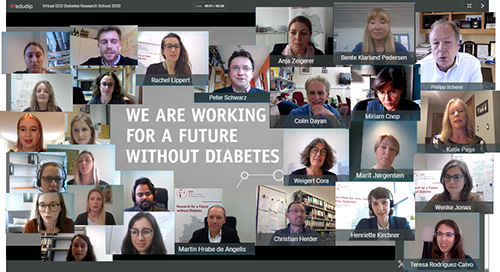 Informal exchange of ideas
The participants were not only informed about the latest findings in diabetes research but also about surprising scientific career paths. Rachel Lippert of the German Institute of Human Nutrition in Potsdam-Rehbrücke (DIfE) told about her motivation as an American to pursue her scientific career in Germany. And Peter Schwarz of the Carl Gustav Carus Medical Faculty in Dresden, as a physician with an MBA, dared to think outside the box. In addition, some participants presented their own work in short presentations with subsequent discussion. The participants could also exchange ideas: Interested parties could meet and network in a virtual café and via video chat.

The online format also has advantages
“The DRS had to take place in a new format this year. Instead of bringing together young diabetes researchers from all over the world in an in-person event as was usual in previous years prior to the Annual Meeting of the European Association for the Study of Diabetes (EASD), we have designed a virtual series of lectures,” said Dr. Brigitte Fröhlich, head of the DZD NEXT Young Talent Program. The online format turned out to be successful. "Although networking online is a little more difficult, the virtual format also had great advantages. On the one hand, more participants were able to listen to the presentations than in an in-person meeting, and on the other hand it was easy to win six top-class experts as speakers," said Fröhlich in her positive evaluation. The virtual DRS was also well received by the participants from 26 different countries, as the positive feedback and lively discussion of the lectures and poster presentations showed.